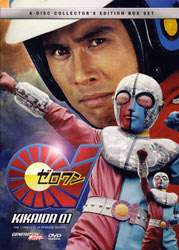 The direct follow up to the original “Kikaider” certainly isn’t as good. I know these shows are nearing their 40th year, their primary audience is prepubescent boys and the story telling and editing can be rather schizophrenic to say the least, but I really felt let down by this show a lot. The main problem is our ne main hero, Ichiro (Kikaider 01) who is played by Shunsuke Ikeda. Unlike Jiro/Kikaider, he has absolutely no vulnerabilities. The writing makes him rather distant, uninteresting and unhuman. The writing and editing of the show are even worse than normal for a early 1970’s tokusatsu hero show. One can only assume that Dr Komyoji created 01, but this never actually explained. We also have a comedic relief guy, Gunta Momochi (Minoru Kuri), a cameraman, but there is no real link between him and the main characters and he eventually disappears after a dozen or so episodes without any explanation.

Despite this, the early plot involving the return of Hakaider (unfortunately Saburo makes no return appearance) and forming a new organisation out of the remnants of Dark is decent enough. It becomes more intriguing when rival evil organisation Shadow shows up wanting the same thing; Professor Gill’s two sons who have the schematics of a deadly giant android tattooed into their skin in invisible ink. It sort of bubbles along quite nicely (but the two boys were a bit annoying really), but then we revert back to the one rather dull organisation and their dim witted evil plans and androids every week. Combine this with the absurd cheapness of this show. Not only do we get the same transformation sequences every week, but they reuse the same shots of explosions and disposals of “faceless minion” androids over and over again. Boredom city. There was also some really weird stuff in the middle of the show. For example there were a number of episodes where androids ripped off women’s tops down to their bras. What the hell was up with that?

After frustratingly disposing of a rather pivotal main character like it was nothing, the last third introduces us to a new android called Bijinda, who in her human form is called Mari (Etsuko Shihomi, very beautiful lady who does a lot of her own stunts). She is originally an evil android sent by Shadow but becomes conflicted and turns on the organisation. Her humanity and empathy really improved the show tenfold. Add in the late inclusion of yet another conflicted Shadow android, Waruda (Takeshi Watabe), and this last arc almost saved the show for me. Pity about the first two thirds. Never have I wanted a show to end so quickly. It’s not too awful, but it ain’t very good. I was going to give it a 6, but it really doesn’t deserve it. 5.5 out of 10.

Remaining Backlog: 24 months (it's much easier this way than listing the number of discs).
Posted by greboruri at 11:51 PM